The Church of St Mary, Easton Neston  ~  A Brief History

When you stand in the Church of St Mary, Easton Neston, you are in a building that has had a presence here for eight centuries as the first recorded Incumbent of this medieval church was Nicholas de Grey in 1223.  At that time the private road in front of the church today was the main road between Watling Street in Towcester and Northampton.  The Church stood between the villages of Easton Neston to the south and Hulcote to the north.  In 1499 the village of Easton Neston appears to have been abandoned, although the Manor House remained to the south until the existing house was started on higher ground in the late 17th Century by Sir William Fermor.  This was designed by renowned British architect Nicholas Hawksmoor and completed in 1702.

This is a building which has evolved over time and much of it dates back to the 13th and 14th centuries. 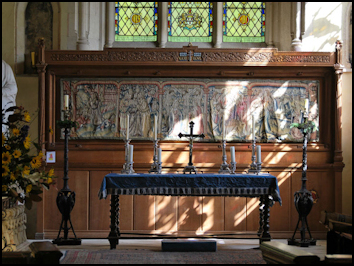 At the east end of the Church, behind the Alter, is the Flemish Predella Tapestry, which dates back to the 1st quarter of the 15th century and hangs in a 20th century oak reredos.  This tapestry was bequeathed for the use of the Church by John Breckinridge Fermor-Hesketh (1917-1961), known as Major John, who masterminded the restoration of the Church in 1959 and 1960 before his death in 1961.  The stained glass window in the south wall of the Chancel is to his memory and in the bottom right hand corner is the inscription “To Johnnie from his loving wife Lorelei”.  This is the last major restoration of the Church, which dates back to the early 13th century.

The outer arch of the south porch is 14th century (c1330) as are the slender octagonal Nave piers.

If you look up you can see your are being watched by ten faces.  These brightly decorated corbels tie the oak roof to the wall brackets and their scary expression serve as a reminder of what will happen if you did not follow the ways of the Church!  In the 13th century, when people were being converted to Christianity, pagan images were often included to help in the transition of faith.  These gave the craftsmen freedom of expression in an otherwise rigorous discipline.

In the 15th century John Bacon commissioned considerable work on the Church in the new Gothic style.  The Church was flooded with light, the aisles widened and new windows added.  The walls in the Nave were raised and clerestory windows added.  These were dramatic changes for a small parish Church. 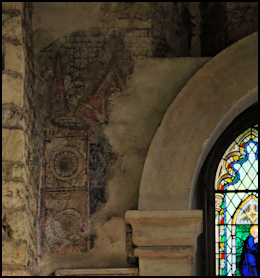 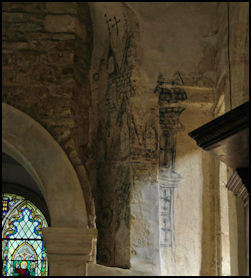 The Church was highly decorated before the Reformation (1517) in which the Church was stripped of much of its glittering content and the walls whitewashed covering wall paintings, some of which have been uncovered in the north aisle.  The medieval wall paintings were uncovered during restoration of the Church in 1959-1960 and are believed to show buildings in the heavenly city.  Before the Chapel was built there would have been a stained glass window above an Alter with a piscina (a drain hole to return holy water directly to the ground), which remains, and it is thought that the paintings would have complemented the subject of the stained glass window.

In 1531 the land surrounding the Church was purchased by Richard Fermor and the life of the Church was dominated by the Fermor-Hesketh families for several centuries until 2005 with the break up and sale of the estate.  There are a number of memorials to the Fermor-Hesketh family which you can read about in the guide book produced by the Friends of St Mary which can be purchased for £2.00. 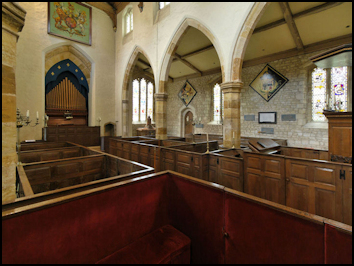 The box pews, pulpit and alter rail were also added in the 18th century.  The box pews are not unique, but rare, and probably survived because the fortunes of the Fermor-Hesketh family were not particularly buoyant at the time when boxes were being replaced by long heavy wooden pews so everyone faced forward.

In 1837 the Church was described as “very decade” and in the 1840s there was much rebuilding in the Gothic style, when most of the stained glass windows were installed to show the lineage of the Hesketh family.

The Organ in the Nave is 19th century and was made by Henry Wills of London c1865.  It is now powered by electricity but was originally pumped by hand and the handles are visible through the open archway on the north side of the organ.  Above the Organ are the Royal Arms, displayed after the Reformation to acknowledge the Sovereign’s position as head of the church.

The last actual construction in the Church was the sealing of the family crypt below the North Chapel 1962 when it became full.

Some of the features to look out for in the Church, as well as the wall paintings at the east end of the north aisle, are the Hatchments on the walls.  These were carried at the funeral showing the deceased’s coat of arms then hung outside their house for up to a year before being hung in the family Church.  This practice came into fashion in the 17th century and Hatchments were still being made in the 1940s.

“Hora e sempre” is Latin for “Now and always”.

Turning to the south aisle we can see a stoup to hold water so people could dip their fingers into the water and cross themselves on entering the Church.   Further along the south wall is a piscina which suggests the earlier presence of an Alter.

Above the piscina is a First World War memorial and looking back towards the Chancel is an Hagioscope, or Squint, so the priest could see what was going on at the main alter or to enable the worshippers to see the Elevation of the Host. 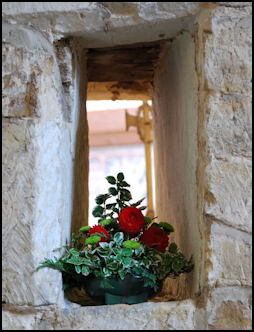 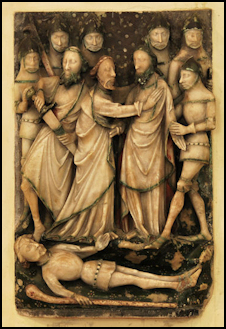 Near the east end of the Hagioscope on the south wall of the Choir is a 15th century Nottingham Alabaster depicting the betrayal in the Garden of Gethsemane.   These were quite common in medieval times and flourished from the 14th century until the early 16th century as alabaster was easier to carve than marble or granite, but they are now quite rare, especially in England.

Returning to the Choir, on the south wall is the massive memorial to Richard Fermor, who purchased Easton Neston in 1531 and died in 1552.  This is craved from Purbeck marble with palimpsest brasses, which are brasses recycled from a previous use.  This memorial has clearly put a lot in of strain on the wall and required the construction of the buttress blocking a doorway in the south wall. 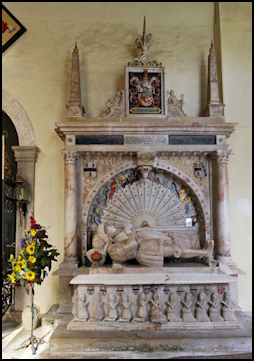 Turning to the north side is the memorial to Sir George Fermor, Richard Fermor’s grandson, who lies beside his wife Mary on the splendid alabaster tomb.  Around the tomb we can see Sir George and Mary in the centre with their 13 children, 6 sons and 7 daughters. Above the figures are shields which were removed for cleaning and painting, which is believed to have taken place between 1728 and 1822, but in replacing them the craftsman placed some of them above the wrong figures.  This is evident to those who understand Heraldry. 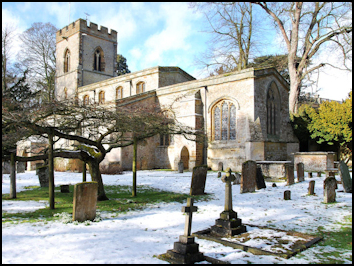 The tower is in four stages with a crenulated parapet and angle buttresses.  It houses a ring of eight bells by Gillow and Johnson of Croydon, which now hang in an iron frame.  The Church had three bells and In 1615 Sir Hatton Fermor, son of Sir George Fermor, gave a fourth.  The 3rd Earl of Pomfret presented a new set of five bells in 1771 and by the 1830s there were six bells.  Two more were added in 1911 providing the current complement of eight bells.

The Church is opened for the monthly Saturday Eucharist Service, which takes place at 6.00 pm on the first Saturday of each month, and on other occasions.  Please take time to visit and look around the Church and enjoy its many fascinating features.

This website uses cookies to improve your experience while you navigate through the website. Out of these, the cookies that are categorized as necessary are stored on your browser as they are essential for the working of basic functionalities of the website. We also use third-party cookies that help us analyze and understand how you use this website. These cookies will be stored in your browser only with your consent. You also have the option to opt-out of these cookies. But opting out of some of these cookies may affect your browsing experience.
Necessary Always Enabled
Necessary cookies are absolutely essential for the website to function properly. These cookies ensure basic functionalities and security features of the website, anonymously.
Functional
Functional cookies help to perform certain functionalities like sharing the content of the website on social media platforms, collect feedbacks, and other third-party features.
Performance
Performance cookies are used to understand and analyze the key performance indexes of the website which helps in delivering a better user experience for the visitors.
Analytics
Analytical cookies are used to understand how visitors interact with the website. These cookies help provide information on metrics the number of visitors, bounce rate, traffic source, etc.
Advertisement
Advertisement cookies are used to provide visitors with relevant ads and marketing campaigns. These cookies track visitors across websites and collect information to provide customized ads.
Others
Other uncategorized cookies are those that are being analyzed and have not been classified into a category as yet.
SAVE & ACCEPT